I just spent a lovely ten days with my parents and sister on their recent visit to Iceland. We got to do a fair amount of out-in-the-country-ing, a fair amount of just-normal-life-ing, a fair amount of errand-running, an awesome bit of horse riding, and I even got all three of them to go sea swimming with me, because they are heroes. (My dad in particular gets a shout out for swimming around the cove with me and making sure I didn’t have a panic attack when the Inferi seaweed started tickling my toes.) So as of today—National Day, as it happens—things are slowly returning back to normal here for me. Although ‘normal’ is actually not normal at all, as I now find myself in the midst of a real sumarfrí—summer vacation, that is—without a daily job or school assignments or any of that. (I’ll cope, I promise.) 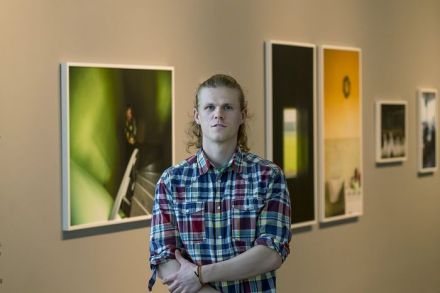 So I’m going through my email and catching up on news and things that happened while I was basically off the Internet, and I’ve been pleased to see that a book of photography by Icelandic photographer Valdimar Thorlacius has been getting a fair amount of attention since it was released at the start of the month. This pleasure is twofold. On one hand, it is a beautiful book of photography on a fascinating subject: the daily lives of hermits in Iceland. On the other, I’m also excited because I translated the accompanying text—excerpted interviews with the photographed individuals—and did so over the course of a weekend. I had editing help, of course, but truly, this is the most extensive (and fastest) translation project that I’ve yet undertaken, made all the more interesting/complicated by the fact that the interview subjects were often talking about the daily circumstances or details of their childhoods on rural farms in Iceland (not a milieu that I’m super well-versed in yet) and also generally had rather roundabout/old-timey colloquial ways of expressing themselves. They are hermits, after all. So I learned a lot doing this translation, not just linguistically, but culturally and historically, too.

END_OF_DOCUMENT_TOKEN_TO_BE_REPLACED

Back in February—a lot happening that month—I was contacted by Patrick Cox, a journalist who, among other things, runs “The World in Words” podcast for Public Radio International. For those of you with nerdy linguistic leanings (or totally hip linguistic leanings, as the case may be), I encourage you to check it out. It’s a fascinating podcast that looks at language from a socio-cultural-historical perspective and since subscribing myself, I’ve learned about the popularity of hesitation words ‘um’ and ‘uh’ around the world (as well as which genders tend to prefer which word), the origin of the game Mafia, C.K. Moncrieff, the fascinating man who translated Proust’s Remembrance of Things Past (and gave it its famous English title), and more.

All of this would be interesting enough to merit a shout-out, but the reason I bring this podcast to your attention now is that based on his visit in February, Patrick has now put together two podcasts about the Icelandic language. And—whoot, whoot—I am (briefly) quoted in one of these. Full disclosure: mine are not the most brilliant contributions on the state of the Icelandic language. But nevertheless, Patrick and I had a lovely chat about Icelandic—a rather invigorating one, I might add, at a point when I was feeling a bit down about the language and my handle on it in general— and I’m delighted to have been a part of his investigations.

I really encourage you to subscribe to the podcast on iTunes (or whatever the kids are using these days), but you can also listen to each episode (17 and 15 minutes respectively) on the World in Words website. There are also written transcripts of both (although they’re abridged, actually—more of me in the podcast version!), but as Patrick says, its preferable to listen to these, as they were all conducted as spoken interviews.

Here’s part one (which I’m included in):

Will Icelanders one day ditch their language for English? (17 min)

This from a professor of mine during a class discussion about our experiences as foreigners in Iceland, and whether we had ever gotten a particularly excited reaction from an Icelander when they found out we were from another country. I said that as an American, I don’t really qualify as an ‘exciting foreigner.’ Rather, because of Iceland’s long history with the US—beginning with the US base at Keflavík during WWII and extending into the ubiquitous presence of American popular culture pretty much everywhere—being an American in Iceland seems about as exciting as being a New Jersian (is that the right term?) in New York. Which is to say, not.

(I’ll digress here to add to this another anecdote: I went to the Red Cross last year to try and sign up for a program in which Icelandic women were paired up with foreign women who had similar interests in a sort of cultural exchange. When I explained that I was from the US, the woman filling out the paperwork looked up, concerned. “Well,” she said, “that might be a problem. The idea is that the Icelandic woman gets to learn about a culture, you see. And so it would be difficult in your case. Especially because Icelanders already know everything about America.” And so, lacking as I did in a real ‘culture,’ I couldn’t get myself an Icelandic friend.)

Anyway, during this class discussion my professor went on to explain that since English is ubiquitous in Iceland, it starts to feel to many Icelanders as though it is the foreign language, spoken by everyone everywhere outside of Iceland. Like ‘a Band-Aid’ becoming a stand-in for ‘a bandage,’ I suppose.

This discussion, I should add, arose after went to see a play as part of my contemporary literature class, a production called „Útlenski Drengurinn,” or ‘The Foreign Boy,’ which was based on Þórarin Leifsson’s Dóri Litli verður útlenskur (‘Little Dóri becomes a foreigner’). The basic premise of the story is that one day (under to a variety of strange circumstances that differ from book to play) a popular Icelandic boy, nicknamed Little Dóri (Dóri short for Halldór, and he’s actually quite big), suddenly becomes foreign. That is to say, everyone around him suddenly believes that he’s foreign, that he can’t speak Icelandic and that he now needs to apply for permission to live in Iceland.

A page excerpt from the book: 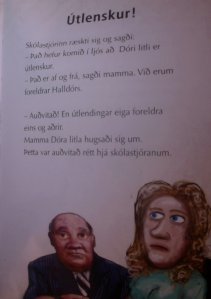 The principal cleared his throat and said:

“It has become clear that Little Dóri is foreign.”

“Of course! But foreigners have parents like everyone else.”

Little Dóri’s mother thought to herself. The principal was right, of course.

Icelandic child: Where are you from again?

Me: The United States.

Me: Where did you think I was from?

Child: Frá útlöndum. [‘From abroad.’ Or, literally, ‘from outland.’]

Don’t worry too much about making mistakes when you’re writing or speaking.
It’s your second language—grammar mistakes are your right.

So, we’ve started doing presentations in my Phonetics and Phonology course (barrel of laughs that, I assure you), all of which are meant to demonstrate something about pronunciation for the rest of the class. Two of the first three groups actually ended up using the same clip for their presentations, a skit from the fabulous (and not yet available in English translation, I think?) sketch comedy show, Fóstbræður (Foster Brothers), which starred Jón Gnarr and (film director) Benedikt Erlingsson among others.

I’m familiar with some of the more classic sketches from this show, although I hadn’t seen this one, in which an acountant-type (Jón Gnarr) is called into his boss’ office for some serious news. (Sorry, couldn’t embed the video, so just click the picture for the link.) 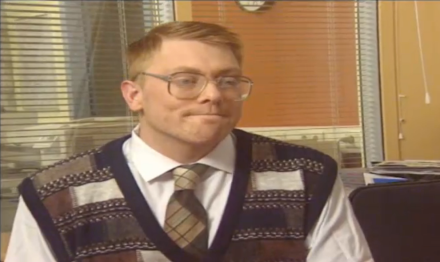 The gist of the video is that Jón Gnarr comes into the office and is told by his boss (Benedikt Erlingsson) ‘Þú ert rekinn,’ which means, you’re fired. But what he hears is “Þú ert drekinn,” or you’re a dragon. Hilarity ensues, particularly for all us útlendingar who are pleased that Icelandic pronunciation isn’t always clear to Icelanders either.

END_OF_DOCUMENT_TOKEN_TO_BE_REPLACED

So: on Friday I had my last day as an official member of the Grapevine staff (although I will continue in a freelance capacity), and on Monday—following a great trip North, which I will tell you all about later—I set about updating my CV for the zillionth time and putting out some feelers for my next expedition into gainful employment abroad. The ink was hardly dry on the CVs when I got an unexpected phone call from the first after school program that I applied to work at, a job basically herding, feeding, entertaining, and preserving children ages 6-9 for a few hours in the afternoon between the end of school and when they are picked up by their parents.

I had thought this job was a no-go, even though I had a very successful interview (I thought, at least), as I hadn’t heard back from anyone since I had gone in for my interview in early/mid-June. But then here was the call I’d been hoping for: ‘You still want a job? Yes? Great—can you start tomorrow?’

END_OF_DOCUMENT_TOKEN_TO_BE_REPLACED

No, I’m not just being vulgar. This is an Icelandic proverb, explained to me by a co-worker today. By way of explanation, he said, “it’ll keep you warm for awhile, but then you’re just wet and smell bad.” This can be applied to hackneyed financial plans, myopic political statements, or any number of situations in life.

For instance, that time a few years ago that our kitchen sink pipes suddenly burst, and our landlady sent her neighborhood helper dude to “fix it,” which really meant that he was just going to wrap duck tape around the hole and leave us the roll for future patch-ups?

Given that peeing in one’s shoes is probably not most people’s first idea when trying to keep warm these days, I think this saying also gives a fair amount of insight into olden days Iceland, too. You do what you gotta do.

I guess if you want to become an Icelandic translator, first you should go live on a farm for awhile, and then you should write some poetry. Then start translating.

Such was Arnaldur Indriðason’s advice, given during a panel at this weekend’s Iceland Noir Festival. The panel, called “The Perils of Translation – Does Icelandic Fiction Translate?” included Arnaldur (his only panel of the festival, actually) as well as authors Árni Þórarinsson and Óttar M. Norðfjörð, and translators Anna Yates (English) and Tina Flecken (German). It happened to come up that Tina, like a few other translators who Arnaldur has worked with, learned Icelandic when she was living on a farm with an elderly couple who didn’t speak English. As for the poetry part, Arnaldur was referring to the late, esteemed English translator Bernard Scuddur, who was a poet as well as a translator, which Arnaldur said added depth and layers to his translation work.

I didn’t get to attend as many of the festival panels as I would have liked (homework and writing called), but nevertheless very much enjoyed the panels I was able to attend, met some lovely people—both some new and familiar faces—and was definitely happy to be able to attend the translation panel.

It’s perhaps a bit after the fact, but if you want to read a festival preview that I wrote for The Grapevine, you can do so here. I also collected a number of Q&As with a number of authors who were in attendance, and got a lot of interesting answers back. So if you are interested in crime fiction, you might find those of interest, too.

One of my teachers amusingly remarked this when students were complaining about the difficulty of an assignment. “Well,” she explained, “it’s not always Christmas.” This is apparently a rather common, “go on and get over it,” phrase that parents are known to use with their kids.