To resume where we left off with Georgia and Lance’s 48 Hour Visit to Iceland:

(As per my new habit: if you want to skip straight to the full archive of photos from this trip, you can do so here. I’ll note that it was a pretty windy, overcast day, so some of my photos–particularly those taken by the coast–are a little more blurry than is ideal.)

After our very successful city day in Reykjavík, Mark and I wanted to take our friends out of the city and into the country, if only for a little bit. Luckily–since they had to be back at the airport at 3:00 PM–it isn’t hard to get to the country in Iceland, nor is it hard to find some really amazing landscapes in the very direction of the airport, less than an hour’s drive outside of Reykjavík.

The sprawling lava plain of the Reykjanes Peninsula is something that most everyone who leaves the Keflavík airport gets to see at least a little of on their way into Reykjavík. That is, unless you arrive in Iceland in the winter and by the time you get out of the airport at 4:30ish, it is already dark. (This was, as you might have inferred, the case for G&L.) But although the peninsula is “a lunar landscape pitted with volcanic and geothermal wonders,” (that per the above-linked tourist website), my impression is that Reykjanes often gets overlooked by tourists who speed through it on their way to volcanoes and the Blue Lagoon. But as far as I am concerned it is more than worth a day trip. If you remain unconvinced, perhaps this description which I read in my Lonely Planet guidebook will make the point. This is the passage that really sold me on visiting this area, at least:

“One of the most wild and wonderful spots is Valahnúker, where a dirt track leads off the main road through 13th century lava fields down to the most desolate cliffs imaginable. You can clamber up to the ruins of the oldest lighthouse (1878) in Iceland…and contemplate the fragility of life and the futility of everything.”

Sounds awesome, right? (Seriously, someone give that travel writer a raise.)

Mark and I read up on several sites in our guidebooks and spent a fair amount of time trying to figure out exact routes, although that was pretty unnecessary. As with many natural sites in Iceland, you take the one major paved road in the correct direction and you’ll get there. The trick is paying attention to the always modest, usually small road signs pointing you off the paved road and onto whatever winding dirt path will take you to your final destination. Those can be a little harder to spot.

It was a cloudy, cold, and clear day, and the wind was just starting to kick up when we left Reykjavík. (The sky was also just starting to get light as we made our way out of town, which I think added to the mood.) After about 45 minutes driving through the lava fields, we passed the oft-maligned town of Keflavík (there’s more than just an airport out there, yes), and turned onto a long, straight road that ran parallel to the coast. We were lucky to pass a fish-drying station (see here for some pictures I took on a previous excursion), which was a wonderful (although perhaps a little smelly) only-in-Iceland sort of place to get to show the out-of-towners.

A lovely day to see the fishes. (Photo taken by Lance.)

After posing with some giant fish heads, we all bundled back into the car. It was quickly becoming windier and colder, which made driving in a straight line a bit more difficult than normal. (I kid, but only kind of.) We were on our way to Hafnaberg–described in our guidebook as “a good look-out point for whales”–until all of a sudden it became totally clear that we were not going to spend much time out of our car that day. We’re driving along, it’s a clear road. We come over a small rise, and suddenly:

Snow on the lava fields in Reykjanes.

We have snow, everyone! Seconds before: no snow. Now: complete ground cover. And more blustery wind. But although this changed our plans a (very) little, it really was kind of perfect. I mean, what better way to illustrate the whacked-out crazy Icelandic weather–and how lovely it (Iceland) still all is (or maybe is especially) when the weather is less than sunshiny? It seemed rather apropos to me.

We hopped out at this vantage point for a short moment, to gaze at the horizon and try to remain upright as the Great Icelandic Wind Monster shoved us to and fro. We didn’t last long, but it was (literally and metaphorically) quite breathtaking.

Mark in the lava

Our next stop was at the “Bridge Between Two Continents,” which, as you will see if you follow that link, marks a fissure between the Eurasian and North American tectonic plates. The bridge there “was built as a symbol for the connection between Europe and North America. One can cross the continental divide on Leif the Lucky’s Bridge…”

For such a dramatic photo op, the spot was rather discreetly marked (as noted above). Observe:

Now, by this time, it was legitimately freezing out and the bridge itself is placed a bit of a jaunt away from where one parks. But on we ventured! And it was actually pretty cool (no pun intended). Besides just being a great landscape, the Bridge Between Two Continents also wins the prize for cheesiest Icelandic signage. Normally, as you see above, signs here are minimal and straightforward. A little historical or scientific information about a location, perhaps, but no commentary. In contrast, these signs were practically giddy:

An ice statue of Georgia, standing on the Europa side of the continental divide.

It took roughly five minutes for my hands to freeze clear through, so after snapping a few more pictures to hopefully crystallize the view for later analysis, we all ran (yes, ran) back to the car, which was a lot easier on the way back, since the wind was pushing in our direction this time. It was about ten more minutes before I had defrosted enough to drive us out of there.

After passing some actually very impressive geothermal energy plants, we turned down a road which had a small sign indicating that somewhere out in front of us was not only the aforementioned crumbling lighthouse and cliffs on which to contemplate the “futility of everything,” but also Gunnuhver, a hot spring named after a witch who is said to have been thrown to her death in the boiling pits there (more fun, eh?). After almost detouring down a construction path (oops!), I turned us onto the correct dirt road, driving us past some really atmospheric geothermal steam vents (pipelines maintained by the neighboring energy plants, I think), which loudly spewed thick, white, sulfury steam in a giant cylinder that then wafted over the roadway. Passing the lighthouse on the hill, we suddenly could sea the ocean right in front of us, waves dashing themselves against some yes, magnificently desolate cliffs. And as an extra bonus, there was a huge bronze statue memorializing the last Great Auk, which is thought to have been killed in 1844 on the island of Eldey, which is about 14 kilometers from where we were at Valahnúker. The wind almost ripped the car door off when I opened it to get out, and I want to say (since it didn’t) that it was worth the risk. 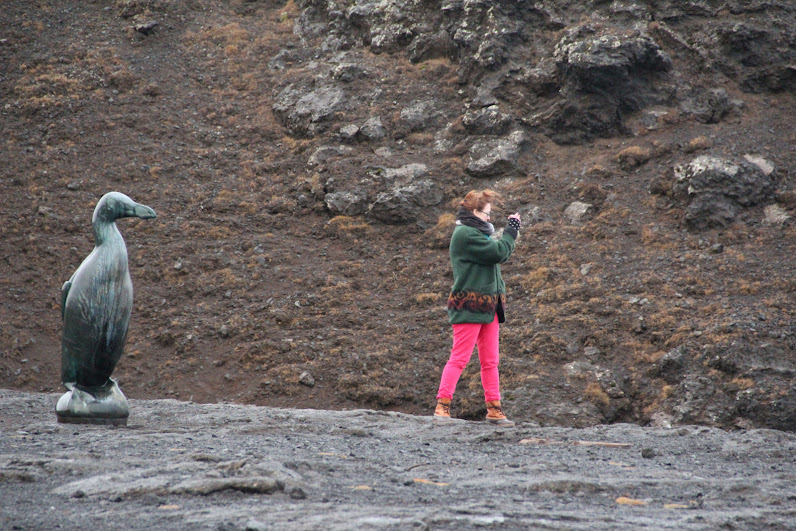 For sizing perspective. Also, a note to self: I will not get lost in the Icelandic wilderness if I always wear pink pants on excursions. (Photo by Georgia.)

Next was a quick stop at Gunnuhver hot spring, but we couldn’t really see anything because the wind was whipping the steam around in thick, pebbly clouds which hurt rather too much to try and see through.

We had planned to have lunch at a seafood restaurant in Grindavík, but they turned out to be closed in preparation for a Christmas buffet that night, so we spontaneously returned to Keflavík–really a rather cute little town, I’d argue–and had a great lunch at the harborside restaurant Cafe Duus.

Then it was time to bid Georgia and Lance goodbye as they headed back to New York.